In the face of unprecedented challenges, humanity is on the move

Home In the face of unprecedented challenges, humanity is on the move

In the face of unprecedented challenges, humanity is on the move

Singapore As diplomats and negotiators from around the world prepare to gather in Glasgow, Scotland, in November for the United Nations Climate Change Conference, governments and industries are getting more serious about reducing carbon emissions and decarbonizing key sectors of the global economy. But even if mitigation measures are deployed immediately—from massive investments in solar and nuclear power to radical geoengineering projects such as injecting sulfur dioxide particles into the upper atmosphere to reflect sunlight—our climate will not snap back to what it was a century ago.

Whatever the next normal is, it will not adapt to us—we will have to adapt to it.

Throughout history, animal species have had one common means of adaptation: to move. We humans have a fight or flight instinct too, and our response to civil war or drought is the sensible one: we move.

Now, gradually but noticeably, we moderns, like our forebears, are becoming a migratory species again. In the decades ahead, billions of people may relocate from coastal to inland regions, from low-lying to higher elevation areas, from overpriced to affordable locales, and from failing to stable societies.

But where will we go? The short answer is: from south to north.

Climatology—figuring out Earth’s climate—warns us how unpredictable temperature, rainfall, and other meteorological conditions are becoming because of rising greenhouse gas emissions and their effects, such as ocean acidification and shifting currents. Climatography differentiates among places on a spectrum from livable to unlivable, and it makes fairly clear that humans’ optimal climate niche—the environmental zones best suited for our agriculture and habitation—is shifting northward.

The more scientists, governments, investors, and the public learn about climatology and climatography in tandem, the better all of us will be able to adjust to the changes. In my new book, I argue that humankind’s highest collective priority should be to relocate people from climate-stressed regions and conflict zones to stable habitats where they—the guardians of our future—can thrive.

Climate isn’t the only factor. Many of the regions best suited to house humanity amid climatic turbulence are actually shrinking demographically because of aging populations, low fertility, or emigration. From the United States and Canada to the British Isles, from the Scandinavian countries and Russia to Japan, northern “climate oases”—favorable for agriculture and with plentiful fresh water—also are the most in need of young workers and taxpayers to care for the elderly and upgrade infrastructure.

At present, only one of those countries has a sustained policy of mass immigration: Canada. Aiming to increase its population by one percent a year, Canada is taking in 400,000 new permanent residents—Brazilian students, Syrian refugees, Indian doctors and software programmers—each year. The U.S., with 10 times more people, takes in about 600,000 people a year.

Canada’s mammoth Eurasian cousin, Russia, is more leery about ramping up immigration, even though its population is shrinking faster than any other large country.

But beneath the surface in Russia, things are changing. In Siberian cities I’ve visited, a new generation of mayors and provincial officials say they view climate change not as a threat but an opportunity to revitalize their dilapidated economies and attract young talent from abroad. Indeed, Indians working as chefs, dentists, and construction workers I’ve met in Kazakhstan are finding opportunities as farmers and steel plant managers in Russia’s Far East.

“We need labor from friendly neighboring countries for our new infrastructure projects, and these projects have to help Russia adapt to climate change,” Rashid Ismailov, head of the Russian Ecological Society, told me.

“We don’t just want to build connectivity with our neighbors, but build our human capital with them as well,” adds Pavel Lapo, head of international cooperation at Siberian Federal State University, in Krasnoyarsk. “We need more exchange programs with Asian universities and need to start teaching in English.”

By and large, European countries have been reluctant to continue to accept the flood of people thrust upon them during the ongoing refugee crisis that began in 2015.

Germany, however, has used the influx to bolster its workforce and industrial output even as its native population keeps shrinking. Along with tens of thousands of refugees from Iraq, Syria, and Afghanistan, thousands of Indians arrive every year to work as IT technicians; they represent a wave of “Asian Europeans” across the continent who may one day outnumber the more than 20 million Asian Americans in the United States.

Foreign populations tend to plant wide and deep roots. There are more than five million Turks in Germany, and last year, the nearly one million Africans in the country demanded their own census. In 2000, conservative politician Jürgen Rüttgers notoriously said that Germany needs “Kinder statt Inder”—babies not Indians. With only 750,000 children born each year (many to migrant families) in a country of 84 million, Germany may have many more Indians than babies a decade from now.

The lure of climate oases

The highlands of eastern Turkey, home to the headwaters of the Tigris and Euphrates Rivers, which nourished Mesopotamian civilization for millennia, is one example. This brisk and verdant region—the Aspen of Anatolia, I call it—has been hollowing out for the past two decades as young Turks have moved westward toward bustling Ankara and Istanbul. Meanwhile, downstream in Syria, Iraq, and Iran, scorching temperatures and perennial drought have entrenched perpetual misery—and driven desperate and disgruntled farmers into cities, where their protests helped spark Syria’s civil war.

Eventually, Arabs and Iranians likely will migrate north to backfill the climate oasis left behind by Turkey’s own people and also will move into the water-rich Caucasus Mountains area.

Climate change surely will accelerate south-north migrations within countries as much as between them.

“Water availability is far higher in the Himalayan-fed rivers such as the Indus, Ganges, and Brahmaputra versus the peninsular southern states,” says Nianjan Ghosh, head of development studies at the Observer Research Foundation, one of India’s premier think tanks. “Efforts at flood control and reducing river pollution are also concentrated in the north,” he adds, citing the Namani Ganga initiative to clean up India’s holiest river, the Ganges. All this suggests the potential for another round of migratory recirculation within the country, with those who had headed south coming back north for a more stable water supply. But as Himalayan glaciers continue to melt, the long-term supply from the Indus in particular is in jeopardy.

COVID-19 has already spurred such a reversal as unskilled workers who lost their jobs in big cities have returned home to their villages, where they decided to stay and become farmers. Last year saw record tractor sales in Bihar, once India’s poorest state but rapidly becoming a productive breadbasket.

Politics plays a role too. Since the government of Prime Minister Modi revoked any vestiges of autonomy from volatile Kashmir in 2019, plans for gentrification have picked up. In August 2020, for example, 75 scenic villages were designated as ecological, wildlife, and tribal tourism sites. The hotel and real estate industries have been steadily acquiring more land for their developments aimed at attracting a Hindu middle class in search of cleaner air and water.

America’s emerging climate oases are also its northern states, such as Minnesota and Michigan, which have ample fresh water and are predicted to experience milder winters in the years to come. Although Michigan continues its pattern of losing more people, including snowbirds migrating to sunny Florida and Arizona, than it’s gained, the signs are shifting. People are starting to buy retirement properties in Michigan rather than Florida, and Duluth, Minnesota, is making a name for itself as a haven for climate refugees. Young people are flocking to affordable Vermont, which offers cash grants to remote workers who relocate there and where agricultural collectives are offering a kind of post-capitalist refuge.

Where will we live?

For the past 6,000 years, most humans have lived in areas with mean annual temperatures between 50 and 60 degrees Fahrenheit. As climate change continues, several billion people will be forced either to adapt to hotter conditions or migrate to cooler locales. 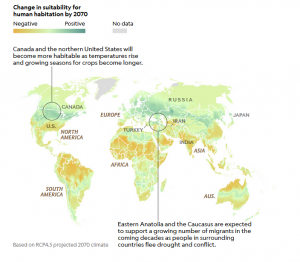 Many of the northern nations that will become more livable during the next 50 years have aging and declining populations. Welcoming climate refugees and immigrants could help alleviate labor shortages.

Katie Armstrong, NG Staff. Sources: Xu, Chi, and others, Future of the

Katie Armstrong, NG Staff. Sources: Xu, Chi, and others, Future of the

Decades of climate negotiations and failure to stem greenhouse gas emissions are a reminder that we lack effective global governance. The same is true for managing migration, which remains one of the most sensitive arenas of national sovereignty. Governments don’t want any international authority telling them which people or how many people they should absorb.

Planning for mass resettlement of human populations is not a worst-case option for tomorrow but a moral and practical obligation we can act on immediately. Governments can design migration policy according to societal and economic needs, designate sparsely populated areas to accommodate new settlers, and invest in more sustainable infrastructure to house everyone—even movable 3D printed buildings and homes.

COVID-19 lockdown has been the most globally coordinated action in human history, but its particular irony is that it has reinforced border closures at a time when we need to reimagine and open borders to allow for inevitable shifts in our occupancy of the planet. I estimate that there are about four billion people who may be both eager and capable of migrating across international borders—a figure that corresponds roughly to the world’s youth population.

The easier we make it for the young to move to places where they can contribute productively, such as by building more sustainable housing and irrigation systems, the better our odds during the turbulent decades ahead.

Humans are becoming a species in search of the right combination of latitude, altitude, and attitude. Like whales, birds, and caribou, we have no choice but to become more comfortable with perpetual movement, changing where we live in search of the most suitable conditions. This should not seem so unusual. After all, for most of human history, we’ve been nomadic. Perhaps, then, as we uproot and move, we will rediscover what it means to be human.