Alarm over rupee devaluation in Dubai

Alarm over rupee devaluation in Dubai 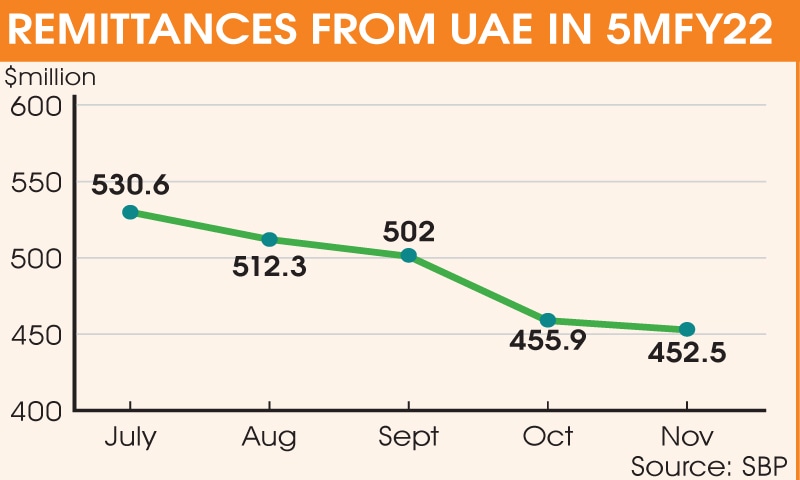 By Shahid Iqbal
Published in DAWN on December 19, 2021

KARACHI: Hawala operators in Dubai are selling the dollar for Rs187-89 (at a premium of three to four per cent compared to rates in Pakistan), resulting in a decline in the official remittances from Pakistanis working in the United Arab Emirates.

In Pakistan, the dollar was trading at around Rs181 in the open market compared to Rs178 in the inter-bank market on Friday.

Local exchange companies say the dollar rate in Dubai is considered the real value of the currency in Pakistan, particularly in the open market.

The open market usually sells the greenback at Rs2-3 higher than the inter-bank market.

“There is a big gap in dollar prices in Dubai and Pakistan. Dubai-based hawala operators have been selling the US currency at Rs187-89, attracting a lot of Pakistanis to remit their income through the system,” said Zafar Paracha, the general secretary of the Exchange Companies Association of Pakistan.

He said the Pakistani market could consider the exchange rate as the real one, which may lead to further devaluation of the rupee.

The State Bank could not be reached for comment.

Hawala money transfer businesses work under a system that allows customers to rapidly move large sums across borders outside the scrutiny of regulators.

The trust-based money transfer system has long been the banking system of choice for many people in Pakistan, but many businesses are unregulated and once the money has left the country it is hard to keep track of it.

Worryingly for the government, remittances from Pakistanis living in Dubai have been on the wane since July amid growing hawala use.

One reason behind an expensive dollar in Dubai is that people from Afghanistan and some Central Asian countries are paying Pakistani exporters in dollars purchased from hawala operators.

In fact, Afghanis are making their payments to Pakistani exporters in rupees at the rate of Rs187-189 instead of dollars.

“Afghanistan and Central Asian countries have been doing it because they have no dollars,” said Malik Bostan, the chairman of the Exchange Companies Association of Pakistan.

He said he has recently briefed the high-ups in the government, including Adviser to the Prime Minister on Finance and Revenue Shaukat Tarin, about the alarming situation since the illegal system of transactions is getting stronger.

“Previously, we used to buy foreign currencies equal to $10 to $12 million daily, but it has now shrunk to just $3-4m. These currencies are officially taken to Dubai to bring back the dollar equal to the value of foreign currencies,” he said, adding that it has deprived the country of a reasonable amount of the US currency.

“I have alarmed the authorities that if this isn’t stopped, the country may lose up to $2 billion in remittances in the near future,” Mr Bostan said.