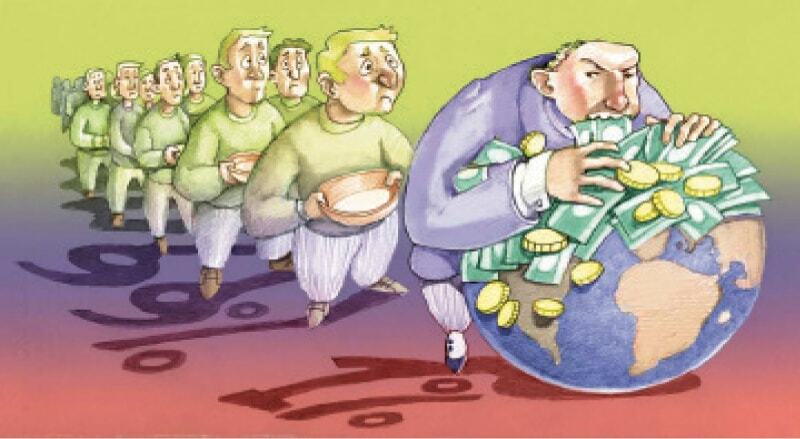 Saeeda, a part-time maid, never had it easy. It has always been tough for her to sustain the family on her own and the fluctuating meagre earnings of her husband Moin, a self-employed house painter.

Now with steep inflation, the family income falls short to cover their basic needs. She wanted her employer to provide a monthly ration on top of her salary. Their refusal has embittered her sorely.

“We also deserve to live. What did it matter to them when they can spend more on the litter of their pet than what my monthly ration costs? After toiling hard, the thought of children sleeping hungry is horrifying. It is so unfair,” she mumbled talking to the writer.

Sadly, Saeeda’s story is not peculiar. There is growing awareness and resentment in the working people towards income disparity.

UNDP estimates that the economic privileges of the elite amount to Rs3.6tr or roughly 6pc of Pakistan’s economy

The denial in official quarters, therefore, sounds delusional. Senior tiers in the relevant ministries insisted that the rich-poor gap in Pakistan has been falling gradually since 1998-99.

They did share concerns over salary differentials in their ranks and with their equals in the private sector but had no clue about wage ratios in the public and the corporate sector.

The wage ratio is the ratio of the top to bottom salaries in a company. A high wage ratio is understood to be a factor contributing to rising income gaps in a country. With global concerns rising about inequity and its consequences on growth and political stability, many developed countries are making it mandatory for companies to report pay ratios to better deal with the issue.

Solid data is not available but close observation suggests that wage ratios are steeply higher in the private sector compared to the public sector in Pakistan. The Security Exchange Commission of Pakistan was approached for their input on wage ratios but they did not revert with a response till the filing of this report.

The current economic survey wrapped up comments on inequality in three paras and a table in the chapter on the social security initiatives. It states: “Over the years, the pattern of income distribution in Pakistan, measured in terms of Gini Coefficient and household income share of the lowest and the highest 20 per cent for rural and urban areas has been mixed and moderate.

He acknowledged that Covid-19 had a differential impact on different segments. Defending the government he added, “the government is taking measures to improve income distribution”. He said the government policies of targeted cash grants during Covid-19 and beyond reduced the ‘disparity between the haves and have-nots’.

“Efforts were made to make the economic rebound more inclusive which can be observed from the rising per capita income in the country.”

Dr Hafiz Pasha, former finance minister, was reported to have dismissed the government narrative on disparity when he said that the overall share of the poorest income quintile is 14.2pc compared to 37.2pc of the richest quintile.

The UNDP’s National Human Development Report 2021 underlined the stark income inequality and the economic privileges of the elite in Pakistan — the corporate sector, landed aristocracy, military and political hierarchy. The estimated cost of these favours is projected to be Rs3.6 trillion ($17.4bn) or roughly 6pc of Pakistan’s economy.

The corporate sector has been identified as the biggest beneficiary of the privileges in form of tax breaks, cheap input prices, higher output prices or preferential access to credit, land and services. The richest 1pc that collectively owns 9pc of Pakistan’s income is second. The feudal lords, the 1pc of the population that owns 22pc of all arable farmland, stand third. While the military with huge business, public works and real estate interests receive Rs355.3bn ($1.7bn) worth of privileges, are next in line.

Responding to the question of why old 2019 data was used in the current survey, Dr Naeem uz Zafar, Chief Statistician, Pakistan Bureau of Statistics said: “The latest PSLM [Pakistan Social and Living Standards Measurement] is 2019-20, after which we have focused on census and have halted surveys till completion of fieldwork of census.”

Another senior official source stated, “multiple factors are responsible for huge wage ratio differential, a global phenomenon not limited to Pakistan”. He thought that a combination of factors including workers’ skills and productivity are instrumental in the determination of wage ratio across the economy.

Nasim Beg, a top executive associated with the Arif Habib Group of companies said he was told in Japan that an entry-level graduate there was inducted at one-tenth of the CEO package in a trading company.

Responding to the question of how Overseas Chamber of Commerce and Industry members will respond if the Securities & Exchange Commission of Pakistan (SECP) amends rules to make reporting of wage ratio mandatory, its Secretary-General Abdul Aleem said, “We will comply with the regulations. It will help better understand the current parity among various levels and hopefully lead to suitable rationalisation. But I presume SECP can direct listed companies only”.

The leaders of the Pakistan Business Council and the Federation of Pakistan Chambers of Commerce & Industry and relevant ministers did not respond on the subject till the filing of the report.