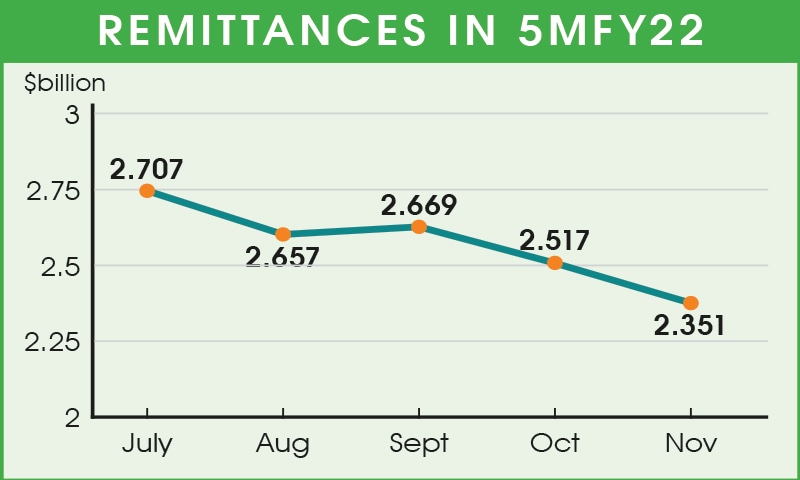 KARACHI: Remi­ttances sent by overseas Pakistani workers fell 6.6 per cent on a month-on-month basis in November but grew by almost 10pc in the first five months of the current fiscal year.

The State Bank of Pakistan (SBP) data issued on Monday showed that the inflow of remittances was $2.35bn in November against $2.517bn in October. The country had received $2.7bn remittances in September.

However, during July-November the remittances increased by 9.7pc to $12.9bn against $11.7bn in the same period of FY21. The SBP noted that workers’ remittances continued their strong streak of remaining above $2bn since June 2020.

Due to the tremendous pressure of rising import bill the country has been facing a tough time from the lenders while the continuous depreciation of the rupee against the US dollar is a reflection of the weak position of the economy, particularly on the external front.

The goods import bill on average per month is about $6.5bn in FY22 indicating a difficult situation for the country to meet the increasing gap between inflows and outflows. The country is expecting to receive about $1bn from the IMF while planning to raise $1bn-$1.5bn through the issuance of sukuk (Islamic bonds).

However, the widening trade gap could further increase the current account deficit (CAD) which has been a burning issue for the government. It succeeded to bring down the CAD from $20bn in 2018 to $1.9bn in FY21 but once again it has started crawling up reaching $5bn in the first four-month (July-October) of 2021-22.

The details of the remittances showed that the highest inflow was from Saudi Arabia at $3.271bn in the July-November period with a negative growth of 1.8pc compared to $3.33bn in the same period of last fiscal year.

Saudi Arabia also placed $3bn in the account of State Bank recently to strengthen the foreign exchange reserves that have been declining since July.

Surprisingly, the inflows from the European Union countries jumped by 41pc to $1.442bn in 5MFY22 against $1.02bn in the same period of last year.

Remittances from the United Arab Emirates rose just 0.4pc to $2.453bn in the period under review. The inflows from the United Kingdom and the United States were $1.768bn and $1.3bn, registering a growth of 14pc and 30pc respectively.

Overseas Pakistani workers from the Gulf Cooperation Council countries remitted $1.452bn during the July-November period, posting a growth of 8.5pc over the same period last year.

Some analysts believe the increasing inflow of remittances is normal because of tight rules and strict vigilance against transactions through illegal channels. However, they also believe the higher import bill was also normal because smuggling has been controlled so the importers are billing officially.