We have a broken system of education in our country; not many will dispute that. An estimated 22 million youngsters are out of school, even though Article 25A of Pakistan’s Constitution states that the state should provide every child between the ages of five and 16 “free and compulsory” education. We don’t even have universal enrolment at the primary level. Only six to eight percent of enrolled children reach university level.

For those fortunate enough to be in school, the general quality of education is poor. All our assessments and evaluation mechanisms make this point unequivocally. Even by class five, in terms of learning, most children are one or two grades behind where they should be. Dropout rates remain high, especially as children transition from primary to middle, and from middle to high school. Examinations at the matriculation level are a major barrier to moving to higher secondary level.

Quality is not a matter just for public schools. Most ‘low-fee private schools’ also provide poor quality education. Madressahs have the same issues. This means some 95-96 percent of enrolled children, by and large, get inadequate education. It is only the three or four percent of children in costly, ‘elite’ schools who get decent quality education.

Pakistan’s is one of the world’s most fragmented and iniquitous systems, where access to quality education is based on parental income, geography, gender, caste, ethnicity, sect and religion. Education is supposed to create equality of opportunity, social mobility and social cohesion. But our system exacerbates existing inequalities, even entrenching them further to create effects over multiple generations.

A new book makes for a good, reflective piece on Pakistan’s myriad education issues, but especially about the medium of instruction in schools

The first part of Reforming School Education in Pakistan and the Language Dilemma is written by Zubeida Mustafa and brings out these, and many other realities, quite starkly. It not only provides context to the above issues, but also gives examples of how these problems manifest in real people’s everyday lives.

When you do not have the money to get a good education, have to work to contribute to the family income instead of being in school, do not have any support at home, do not know the language in which your teachers speak and, when the language you speak at home differs from languages you are supposed to interact in and learn at school, and so on, accessing quality education is not easy.

Yet many millions of children keep going to poor quality schools and many more do want access to quality education. The question of how they can access it remains. We will return to this issue when we discuss some of the examples of solutions that are being experimented and implemented.

The second part of the book — with contributions from well-known researchers and activists in the field of education — takes a deeper look at the language issue: what languages should be taught to children in schools and when, and which language should be the medium of instruction and when.

We still do not have clear language policies at the federal, or even at the provincial levels, and this confusion has been in place since 1947. There has always been clarity on the fact that policymakers understand the importance of English as a global language and Urdu as the national language and want to ensure that children learn both. But beyond this clarity, all has been quite confusing.

What role should local languages play in education? What should be the medium of instruction and when? Should Urdu and English be introduced from the very beginning? Is there a need to transition from local languages to Urdu and then to English as we move to higher grades? Successive policies have, oftentimes, taken contradictory positions on these issues. 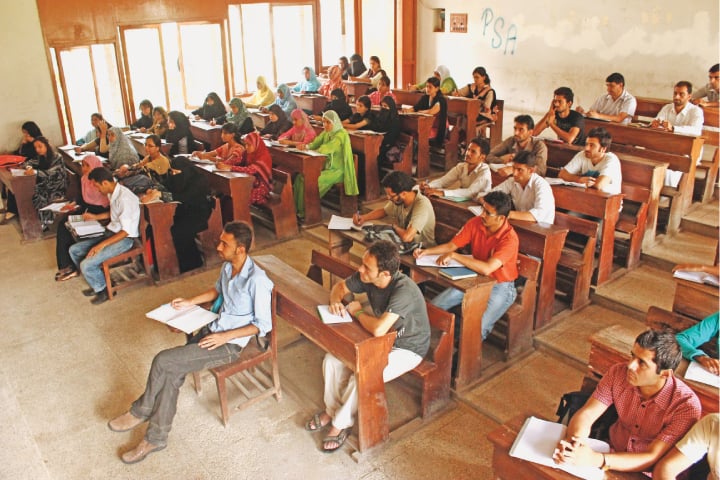 Some facts are acknowledged by all. Mother tongue instruction is important in the initial years: a child’s ability to learn develops better if she is taught in the language she understands well and interacts in at her home. Urdu is important not just as a national language, but as a language spoken/ understood across Pakistan now and a lot of social and economic activity is conducted using Urdu. English is important for higher education as well as for socio-economic mobility and acquiring better paying jobs. There is a significant ‘premium’ for having fluency in Urdu and, especially, English.

Although the importance of mother language education is now acknowledged in most policy circles, not a whole lot has been done to implement this as a policy. Many regions and provinces (Punjab, for instance) still do not use mother language in early years and/ or have not invested in making that possible. It is also not clear as to when the medium of instruction should — if at all — change to Urdu or English after the ‘initial’ years have been in mother language.

Pakistan has a huge diversity of language and dialect; sometimes dialects change every 20 kilometres or so. But very few of these make it to the formal education system. Even languages spoken by millions (Pashto, Punjabi, Sindhi) have had to fight hard for space in schooling and for some — Punjabi — the battle is far from over.

Parental preference for their children to be proficient in Urdu and English is very clear and quite understandable: the ‘return’ on investment in language proficiency is high. But language proficiency requires immersion and high quality teaching. We have not been able to ensure quality of education in general and in the teaching of languages as well. The Annual Status of Education (ASER) and other assessments show that our children do quite poorly in Urdu, too, and not just in English.

Qurratul Ayn is a youngster whose case study Mustafa details. Her struggles, explored in chapter seven, are echoed very well in later chapters that discuss language and education issues in depth. Clearly, we need better policies in this area than what we have been implementing. We need clarity on the use of mother language and when transitions need to be introduced, and we need clarity on what languages should be taught in schools and when, and we need to ensure we teach these languages well.

It’s not that civil society and the private sector have not played their part in coming up with solutions. They have. Part three of the book, again comprising contributions by well-known experts and practitioners, gives a good introduction to some of these efforts. The Citizens Foundation (TCF) is very well known in this regard. With more than 1,500 schools, TCF is probably Pakistan’s largest not-for-profit provider of education. It has shown excellent academic results and is providing quality education to hundreds of thousands of children from low-income households. And TCF is not the only not-for-profit doing that.

Though online education has been around for a while, the Covid-19 shutdown of schools has given it a new impetus. Many initiatives are being taken and this holds new hope for ways in which we can reach out-of-school children, adult learners and children who require more flexible ways of approaching schooling and learning.

The Aga Khan University Examination Board (AKU-EB) has opened up possibilities of assessment reforms. Our examination system, at matriculation and intermediate levels, is quite broken; AKU-EB shows us how changes can be made here while working with the same curricula and syllabi. This section of the book also gives examples of reforms in teacher training, and showcases experiments in innovative schooling, as conducted at Harsukh, a school at Thather village outside Lahore.

But a number of questions remain. What do these examples show? Can these examples be generalised? Can they be scaled up? In some cases, they can. Assessment reforms can take heart from the example AKU-EB has given. Similarly, there is much to learn from TCF for government as well as private schools. Online education also offers promising avenues for the future.

But none of these lessons will automatically make it to policy and be implemented properly. Does the government have the willingness to learn and to implement? This, in the end, might be the biggest question for us to try and answer.

Mustafa has been writing on education and, in particular, language issues in education, for a long time. This book, in a way, is also a reflection on all this work. Using examples from people’s everyday experiences, the book makes education issues more concrete and real for everyone.

The chapters written by experts allow reflection on these experiences from different and distinct vantage points. Though individual writing styles vary, and some chapters are more stand-alone than others, the whole makes for a good, reflective piece on Pakistan’s education issues. It would be good for parents, teachers, policymakers and practitioners concerned to read the book and reflect on the points it makes.