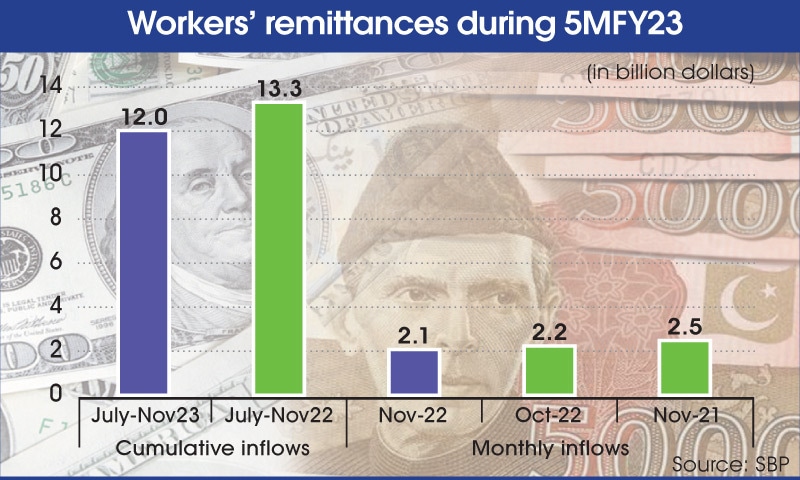 By Shahid Iqbal
Published in DAWN on December 15, 2022

KARACHI: Remittances sent by overseas Pakistanis declined by 14 per cent in November this year. The inflows fell by 9.6 per cent during the first five months of the current fiscal year (FY23).

The latest data released by the State Bank on Wednesday showed that the remittances kept falling and declined to $2.1 billion in November from $2.5bn during the same month last year. The inflows declined by 5pc compared to $2.215bn in October this year.

Currency experts and bankers believe that the low inflows are the direct consequences of a wide gap in dollar rates. The grey market offers Rs255 per dollar, while banks provide Rs224.71 for a dollar.

“The major reason for a decline in remittances is 10 per cent differential in the open market and interbank exchange rates,” said Tahir Abbas, head of research at Arif Habib Limited. He said expats are getting 10pc higher rate for the same amount of remittances sent via unofficial channels, leading to a decline in the official remittance figure.

“Also, exporters are holding back US dollar proceeds amid this widening currency gap. The government needs to tackle this gap on a war footing to aid exports as well as remittances,” he said.

The government and the State Bank are unable to allow a free market mechanism for the exchange rate, particularly in the wake of poor foreign exchange reserves of the central bank.

Though the State Bank governor recently assured with a number of statistics that Pakistan only needs to pay $4.7bn this year and the rest of the dues would be rolled over, the market remained unmoved. Currency experts said only inflows could stabilise the market, while pointing out that remittances depend largely on political stability.

Former finance minister Miftah Ismail recently said the country needed a free market exchange rate that would help resolve the issues being faced by the government.