Through the glass ceiling and the language barrier

Home Through the glass ceiling and the language barrier 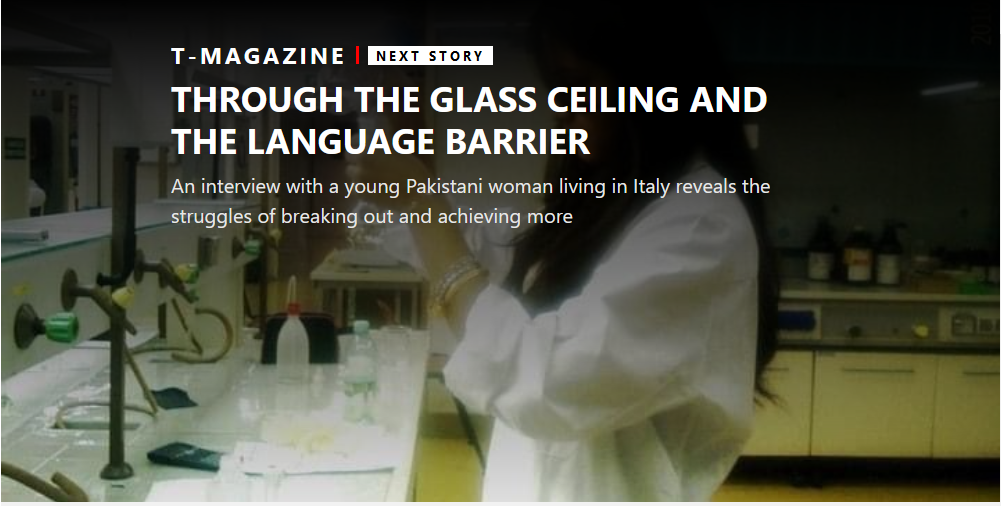 Through the glass ceiling and the language barrier

By Daud Khan/Ahmed Raza
Published in Express Tribune on October 24, 2021

MILAN: The Pakistani diaspora in Italy – numbering about 150,000 – is the largest in Europe after the UK. The bulk of the first generation immigrants have limited education levels and are stuck in low income activities such as picking fruit and vegetables, managing livestock and working as un-skilled or semi-skilled workers in factories. If they work as agricultural labour, they predominantly live in poor-quality rented accommodation in small villages and towns or if they work in factories or the service industry, they live in areas dominated by other immigrants. Generally, language abilities are limited, particularly among women, many of who are only comfortable in the dialect of their area of origin. Thus, interaction and integration with the local Italian community is very limited.

The community is increasingly caught in a trap. In the case of the first generation, as a result of low incomes they are not likely to be able to return home with enough savings to start a new life different from that they left. Most will therefore remain in Italy. If they were lucky enough to have had legal work contracts, they will have access to free health care but are unlikely to qualify for more than a minimum state pension. This would be just about enough to survive.

Problems are even more severe for the second generation Pakistanis who are reaching adolescence or young adulthood. Living at home with their parents is hard. They have grown up with very different social values and behavioral norms. Conflicts – that sometimes erupt into violence – are common. Young girls are often a primary victim. More worryingly, there are only a limited number who are acquiring the necessary skills to break into quality jobs which would allow them to strike out on their own. That said, there are many examples of outstanding men and women who have taken on the challenge of making a new life for themselves – they have learnt Italian; they have taken immense risks; are well integrated into Italian society; and are making a success of themselves.

Most of these success stories revolve around men. In this article we want to highlight the achievements to a fearless young woman who is rapidly making a career for herself as a scientist and manager in the pharmaceutical retail industry. Ayesha lives and works in Milan where she moved after 12 years of studying and working in Rome.

Ayesha came to Italy when she was 18 years old with the rest of her family. She had completed her FSc in Islamabad and was applying in the National University of Science and Technology (NUST) and the Army Medical College in Islamabad. Not wanting to be left behind with relatives in Pakistan, she never completed the admission process and left with her family for Italy. In Rome it was not easy for her to continue her studies. Most courses at public universities were in Italian of which she knew not a single word. There were a few English language private universities that catered to the diplomatic community and the Roman elites however, those cost an arm and a leg.

ET: So here you were in Rome, not speaking Italian and with no plan of how to continue your studies. So what happened next?

A: Over the course of a few weeks a series of totally unexpected events changed my life. The chain of events started when I was at The John Cabot – one of those super expensive English language universities in Rome. I had wrangled my way in there for a one week ‘test period’. I was sitting in the cafeteria when a girl asked me for a lighter. I don’t smoke but we got talking and when I told her about my plans and problems, she told me that they were doing entrance exams at the Department of Medicine at Tor Vergata – one of the three public universities in Rome. For the first time they were going to do a degree course in pharmacy in English. The next day I went there with my mother and an Italian lady to act as an interpreter. The Director of the course was very kind, understanding and supportive. But, he informed us, the entrance test was being held that morning. In fact had already started.

My mother made one of those suggestions that only parents can make. It was so crazy that I would not have even dreamt of making it. She said “can’t my daughter try even if the others have started.” The next twenty minutes were a dream but I found myself in a hall with almost hundred people taking a multiple-choice exam. Joining late, I had just over an hour and a half to complete the exam for which other candidates had three hours. But apparently my score was among the top three. The Director and the faculty staff were so impressed that they allowed me to start attending classes even though they were the paperwork for admission that academic year still needed to be completed. I remain immensely grateful to all the staff at the university who were willing to bend the rules for me.

ET: How did you find the course?

A: It was hard in terms of the academic work load. Of the hundred or so students who started, only 20 graduated. But it was particularly hard for me. We lived on the other side of Rome from the university and travel time – by bus and underground – was one and a half hour each way.

Halfway through the course my parents left Rome. I moved into a rented apartment which I shared with other two girls. But living alone meant addressing a whole other set of problems. I had to get documents to register with the police, the tax authorities and for the health system. I had to learn Italian to be able to speak to flat-mates and the few friends I was beginning to make. I also had to work because my parents could not afford to cover all my costs – I taught English as a series of language schools scattered around Rome which meant lots of travelling. I also had to move house several times and being a student with a tight budget, getting a taxi for help was never an option and I had to lug all my belongings by public transport.

ET: What happened once you finished your degree? 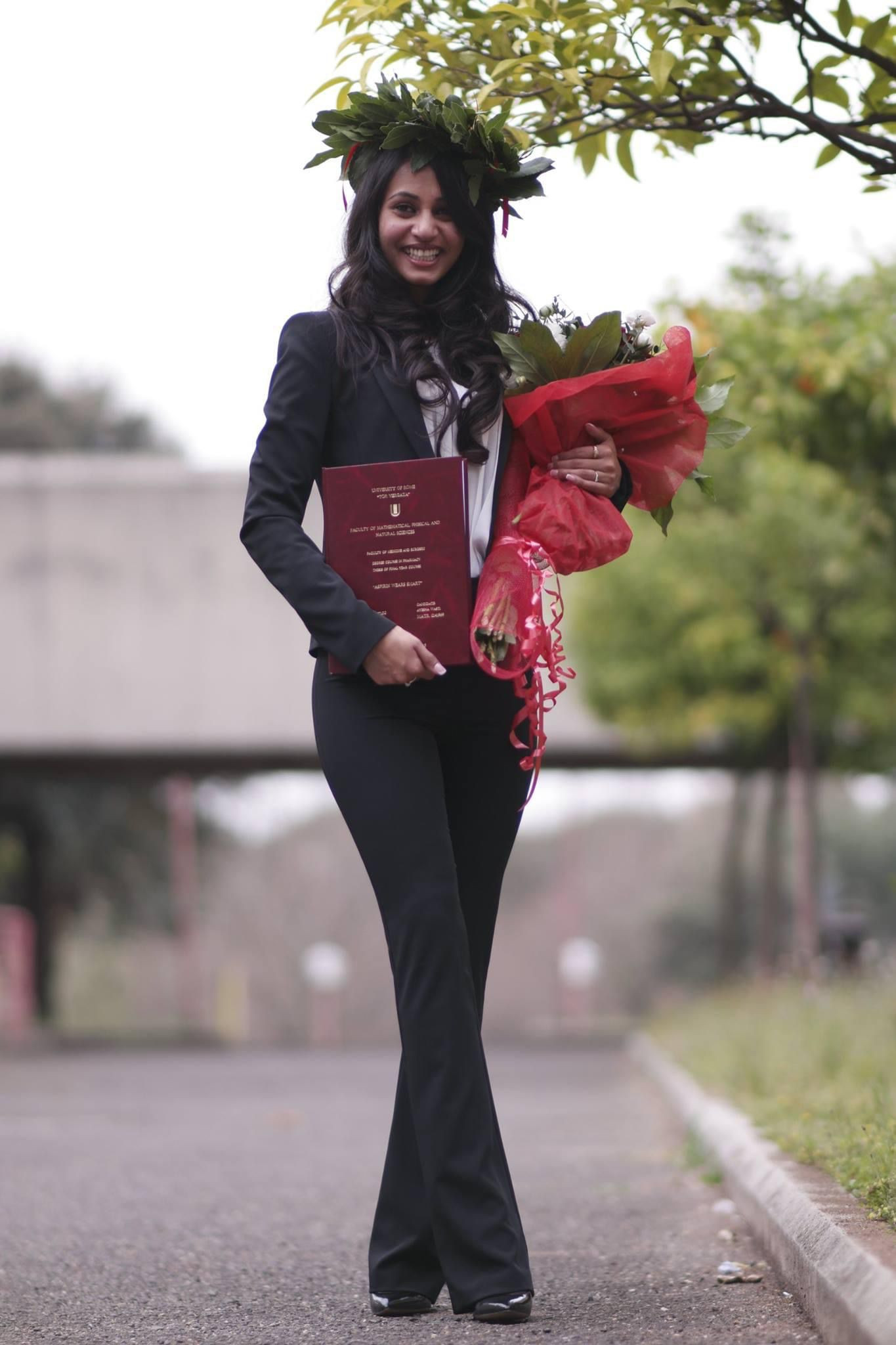 A: In Italy a degree in pharmacy does not allow you to practice. For that you have to get a state license which required more exams and work experience. So after finishing my university exam in September 2015, it was straight back to studying and working as a ‘trainee’ in a pharmacy. I also had to continue the teaching English so I would have enough money to live on.

But things changed after I got my state license. I was offered an internship and then a full-time job at the production unit of a big pharmaceutical multinational. The unit was located in Aprilia – about 40 kilometers south of Rome. I still did not have a driving license or a car at the time and had to get up at 4 am to get there by public transport. But I was happy as I was on my way to achieving my dream of being a professional.

In 2019, I got an offer to move to Milan with another company. The salary was higher and the prospects better. So here I am. I have been here only two years and have recently been promoted.

ET: Did you face racism or Islamophobia in Italy?

A: When I was working in Aprilia I was the only foreigner among 800 employees. I used to joke about it with my colleagues that I was bringing ‘multi’ into this multinational company.

Even though I was very well welcomed from day one, I did find myself answering questions about the murder of a young Pakistani girl, Sana Cheema, by her family in Brescia in 2018 or the more recent presumed murder of another girl of Pakistani origin, Saman Abbas. I wouldn’t say I felt racism or Islamophobia but I did perceive hostility towards immigrants living in a secular country committing crimes in name of a religion. It does not help that the killers in both cases fled to Pakistan and our government is perceived as not doing enough to bring them to justice.

ET: How do you see your future in Italy?

A: It’s been almost 13 years that I have lived here in Italy. This country helped me achieve my dreams of being an independent woman without putting any social or cultural pressure. I was able to complete my studies, get a double master degree and a white collar job.

Today I work in a pharmaceutical retail network as a Retail Operations Manager. I supervise 10 area managers with a network of 150 pharmacies spread throughout Italy. I recently bought a house here in Milan and plan to get married next year. I do see a bright future for myself here in Italy Inshallah.

ET: What message would you like to give to young women in Pakistan?

A: The message I would like to give to young women in Pakistan or anywhere in the world is: ‘’You can do anything your brother can do. It’s one of the greatest gifts you can give to yourself—a belief that, as a girl, your voice, and your talents matter. Believe in yourself and your own abilities. If you wish to be a mother and a wife, excel at it. If you choose to have a career and a life filled with travelling, don’t feel like you must feel guilty about your choices. And yes, it’s possible to have both, a beautiful family and a successful career. It’s all about your attitude towards your dreams.

On a personal level I would say always be a lady and learn how to act and behave in different situations that you will face. Make sure that you never forget your roots and who you truly are. Aligned your behavior to the challenges that face you but sat aligned and connected your values in life.