Webinar Report on Covid-19 and its Impact on Out and Return Overseas Labour Migration from Pakistan: Major Issues and Concerns

Home Webinar Report on Covid-19 and its Impact on Out and Return Overseas Labour Migration from Pakistan: Major Issues and Concerns 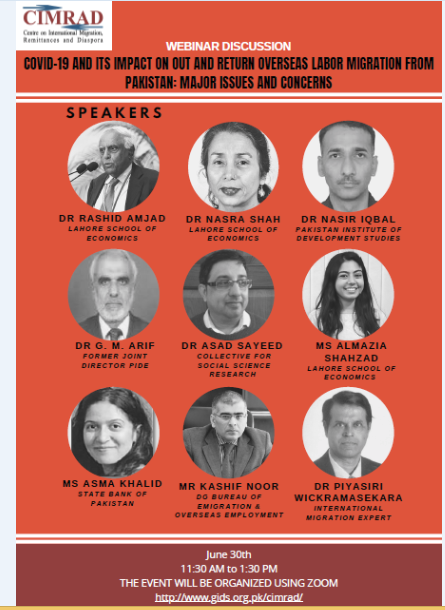 Webinar Report on Covid-19 and its Impact on Out and Return Overseas Labour Migration from Pakistan: Major Issues and Concerns

REPORT ON COVID–19 AND ITS IMPACT ON OUT AND RETURN OVERSEAS LABOR MIGRATION FROM PAKISTAN: MAJOR ISSUES AND CONCERNS (Webinar at Lahore School of Economics, Centre on International Migration, Remittances and Diaspora (CIMRAD), June 30, 2020) Among the wide range of issues raised and debated in CIMRAD’s webinar on June 30, there was a consensus on three points. First, that labor migration is unlikely to return to the pre–pandemic times in the near future but defining what the new “normal” will be and when it will start to unfold is not possible at this time. Second, labor migration is a multi–faceted and complex phenomenon which makes it difficult to build scenarios that would accurately predict the future. Third, that recent decline in remittances during March–May 2020 also reflect real supply side constraints as a result of lockdown measures in labour receiving countries and delay in payment of salaries which impacted flow of remittances through formal channels besides loss of employment. A few themes around which the discussion centered are as follows. Projecting the impacts on emigration levels, returnees and labor market By the end of June 2020, a minimum of about 100,000 Pakistanis had lost their jobs overseas and another 102,000 were unable to proceed overseas since their work permits could not be processed because of the lockdowns, according to data shared by Mr. Kashif Noor, D.G., Bureau of Emigration and Overseas Employment (BEOE). According to him these number of return and out migration will in all probability increase in the coming months. According to estimates presented by Dr. G.M. Arif, former Joint Director, Pakistan Institute of Development Economics (PIDE) and a leading migration specialist, based on alternate assumptions (high, medium and low) as many as 470,000 to 800,000 Pakistani workers overseas may return to Pakistan following the pandemic. However, he made clear that there had always been a steady flow of return migrants to the country preceding the pandemic and it was difficult to ascertain exactly the additional number of returnees as a result of the pandemic. What was important was the number that left the country to work abroad and this number had come to a sudden halt with the onset of lockdowns in host countries. If the number of out migrants in 2019 had remained the same in 2020, about 600,000 workers would have gone overseas. He thus cautioned that the combined net effect of the current stoppage of outflows and higher number of returnees is bound to result in a massive negative impact on the domestic employment situation and a sharp increase in the unemployment rate from the current; near 6 per cent to 9 per cent. Read More