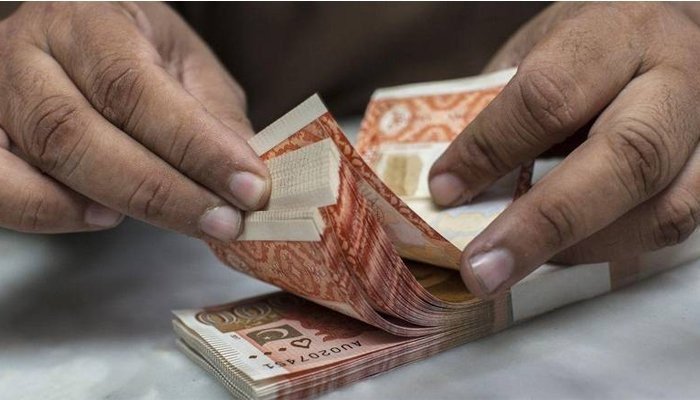 By Shahbaz Rana
Published in The Express Tribune on January 26, 2022

ISLAMABAD: A new debt policy statement for the last fiscal year on Tuesday revealed that the federal government’s burden was Rs11.8 trillion higher than legally allowed limit set by parliament and that some targets fixed under the debt management strategy were also breached.

The federal cabinet on Tuesday approved placing the Debt Policy Statement 2021-22 before the National Assembly to meet a requirement of the Fiscal Responsibility and Debt Limitation Act of 2005. The policy statement analysed the debt conditions during the fiscal year 2020-21 – the third year of the ruling Pakistan Tehreek-e-Insaf.

The cabinet approved the report a day after the PTI government took the most expensive asset-backed loan in the history of Pakistan by paying 7.95% interest rate on seven-year Sukuk.

The International Monetary Fund has given three more days to Pakistan for review of its case.

The report has been prepared by the Ministry of Finance that is working without a permanent director general of its Debt Policy Coordination Office.

The statement also showed that contrary to the claims made by the government that the debt burden was increasing due to repayment of old loans, the external debt repayments in fact reduced by $2.1 billion or 23.3% in the last fiscal year as compared with the preceding fiscal year.

The cost of interest payments also reduced from $2 billion to $1.5 billion due to debt suspension initiative by the G20 countries. The government’s reliance on highly expensive and shorter term foreign debt also further increased due to its decision to increase dependency on foreign commercial banks and Naya Pakistan Certificates.

The government’s reliance on domestic commercial banks also significantly increased, as the banks held nearly half of the government debt papers or Rs12.8 trillion, according to the report.

The finance ministry informed the federal cabinet that despite challenging macroeconomic environment, Pakistan’s debt-to-GDP ratio reduced by around 4 percentage points and stood at 83.5% or Rs39.9 trillion at end of June 2021.

But “the ratio remained higher than the threshold of 59% (Rs28.1 trillion) to be achieved by fiscal year 2020-21 as stipulated in Fiscal Responsibility and Debt Limitation (FRDL) Act”, said the finance ministry in the report. In absolute terms, the Rs39.9 trillion debt stock was higher by Rs11.8 trillion when compared with the statutory limit set under the law.

However, the PTI is not the only government that has been violating the FRDL law. The PPP and the PML-N governments too were in violation of the FRDL Act that had been enacted to ensure fiscal discipline in 2005. But the difference between the PTI and the other two political parties was that Prime Minister Imran Khan had said in February 2019 that one benchmark of the success of his government would be the reduction in the public debt to Rs20 trillion.

The finance ministry said that the 83.5% debt-to-GDP ratio was expected to reduce to 74% by end- June 2024 on the back of government’s commitment to run primary surpluses and promote measures that support higher long-term economic growth.

The debt policy statement has been prepared on the basis of the old base year of the economy, which the government last week approved to change to new year. This change in base year will help reduce the debt-to-GDP ratio to nearly 72% but there would not be any reduction in the debt size.

Debt strategy off the mark

The finance ministry stated that the average time to maturity of the domestic debt further reduced from four years and one month to just three-and-a-half years. The government’s target was to keep it at least to four years. The three-and-a-half years’ ratio was just a month above the minimum threshold of three years and five months set in the Medium-term Debt Management Strategy.

Similarly, the average time of maturity of the external debt also deteriorated from last year’s level of seven years to six years and eight months. The official target was to restrict it to at least seven years in the previous fiscal year.

“A few annual targets set for FY 2020-21 with respect to debt risk indicators were slightly missed mainly due to higher than envisaged federal fiscal deficit; lower than planned issuance of Sukuks, net retirement in national saving schemes stock mainly due to encashments of prize bonds; non-materialisation of envisaged privatization proceeds, running-off of existing external public debt portfolio and slightly higher mobilisation from commercial sources and the need to build the cash-buffer in anticipation of upcoming maturities,” according to the finance ministry statement.

The government borrowing for financing of federal primary deficit was Rs967 billion and Rs2.75 trillion was added to the debt due to interest servicing cost, the ministry said. It added that interest servicing cost remained lower than its budgeted allocation due to reduction in domestic and international interest rates and relief availed in the form of Debt Service Suspension Initiative by the G20 countries.

The impact of exchange rate was favourable, which reduced the rupee value of external public debt by Rs665 billion, it added.

The ministry said that the stock of the domestic debt was recorded at Rs26.2 trillion at end-June 2021. The government also took Rs28 billion debt through highly expensive Naya Pakistan Certificate.

The external public debt was $86.4 billion at end-June 2021, witnessing a net increase of around $8.4 billion during the year, according to the policy statement. The commercial loans increased by $1.5 billion which were obtained from foreign commercial banks and another $900 million was added through Naya Pakistan Certificates, and Pakistan Banao Certificates, according to the report.

The share of foreign commercial loans increased from 11% to 13% in external public debt.

Pakistan also took advantage of the G20 imitative that restructured its $2.3 billion debt in the last fiscal year 2021.

The report showed that the external public debt repayments were recorded at $6.9 billion during FY 2020-21 compared with $9 billion in the preceding fiscal year. This decrease was mainly on the back of G20 debt deferment.