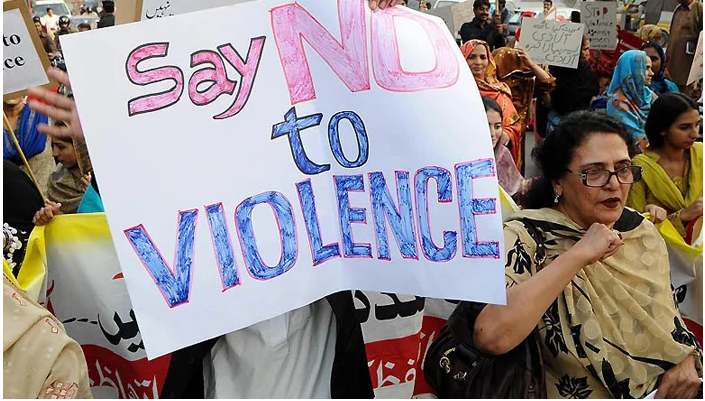 By Fatima Khan
Published in The News on December 06, 2021

Pakistan has seen a sharp increase in the cases of gender-based violence during the COVID-19 pandemic, recent studies have shown.

According to a report by Aurat Foundation, 2,297 cases of gender-based violence were reported during 2020.

Meanwhile, a 2020 bi-annual report of Sustainable Social Development Organisation (SSDO), the Tracking Numbers State of Violence Against Women and Children revealed 158 cases of domestic violence were reported during the initial months of 2020, with Punjab as the worst-affected region followed by Sindh and Khyber Pakhtunkhwa.

A total of nine cases of violence against women in January increased to 165 cases in June 2020.

Gender-based violence is a global pandemic that has affected one in three women in their lifetime. According to the World Economic Forum’s (WEF) Global Gender Gap Report 2021, Pakistan ranks at 153 out of 156 countries on gender inequality, standing seventh among eight countries in South Asia, only better than Afghanistan. Gender inequality, patriarchal norms and abuse of power that have risen dangerously over the past few years are the main causes of gender-based violence.

Addressing a symposium on Gender-Based Violence titled “Women as Drivers of Change” at Kinnaird College for Women Lahore, Economic Policy Analyst at UNDP Punjab, Maheen Rashid said gender equity is at the heart of the SDG agenda which is a crucial goal of the Sustainable Development Agenda.

“If you invest in the education and health of women, it will not only help women with their due rights but will have positive effects on the society as women not only lift themselves but they also lift societies”, she said.

Speaking on the occasion, the founder of The Current, Mariam Chaudhry also added that there is a huge demand for ‘masala content’ in Pakistani media which reflects what our society is teaching us and thus aggravating violence against women in Pakistan.