Remittances from Pakistani workers employed abroad exceeded $2 billion for the 10th consecutive month in March at $2.7 billion — up 43 per cent from a year earlier, the State Bank of Pakistan (SBP) said on Monday.

Proactive policy steps by the government and the SBP to spur inflows through formal channels, combined with limited cross-border travel, medical expenses and altruistic transfers amid the pandemic to fuel the rise, it said in a statement. 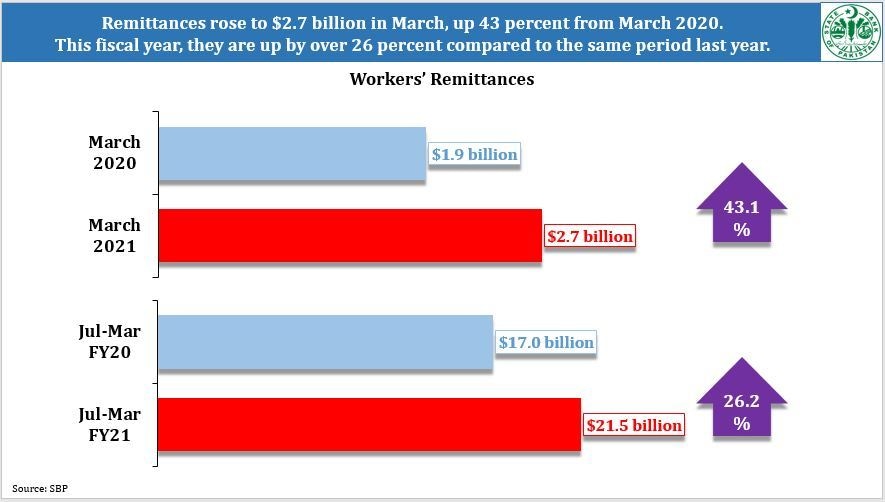 According to the SBP, a large part of the remittances during the July to March period in FY21 came mainly from Saudi Arabia, standing at $5.7 billion; the United Arab Emirates, at $4.5 billion; with $2.9 billion from Britain and $1.9 billion from the United States, the central bank said.

“The love and commitment of overseas Pakistanis to Pakistan is unparalleled,” Prime Minister Imran Khan said on Twitter.

The love & commitment of Overseas Pakistanis to Pakistan is unparalleled. You sent over $2bn for 10 straight mths despite Covid, breaking all records. Your remittances rose to $2.7bn in Mar, 43% higher than last yr. So far this fiscal yr, your remittances rose 26%. We thank you

“You sent over $2 billion for 10 straight months despite Covid, breaking all records. We thank you,” he said.

Finance Minister Hammad Azhar also shared the news on Twitter. “The increase in the July-March period is 26.2pc (from $17bn to 21.5bn),” he said.

Workers remittances have recorded an increase of 43% in March compared to same time last year.
The increase in July-March period is 26.2% (from usd 17bn to 21.5 bn).