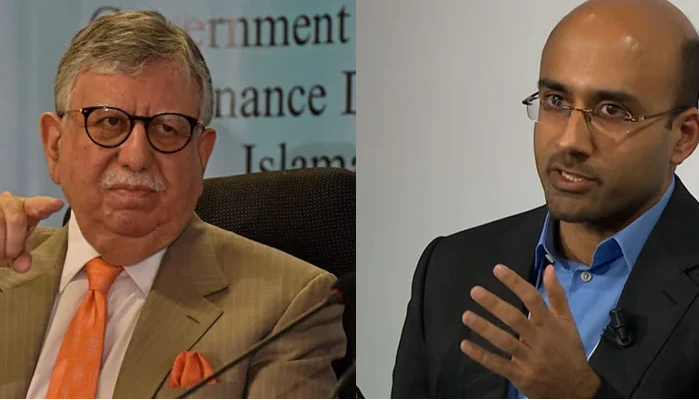 ISLAMABAD: Former finance minister Shaukat Tarin has opposed economist Atif Mian’s tweets regarding leaving economy in the worst shape, arguing that he should have contributed to benefiting economy rather than taking a telescopic view from far away. Tarin made a telephonic call to this scribe on Tuesday and shared a detailed written reply to the tweets of Atif Mian and stated that it was the reply from the PTI.

He stated Dr Atif Mian is a renowned academic and we greatly respect his opinions. It is unfortunate that as we tried to engage with him as a member of the Prime Minister’s Economic Advisory Council, the move was vocally opposed by the extremist elements in the opposition. These same people are currently sitting in the coalition government at the center. Pakistan lost out as a result of not being able to engage with the likes of Dr Atif Mian and other academics, he added.

He said that it would also have been a value-added experience for the likes of Dr Atif Mian, who would have benefited from understanding the ground realities of the challenges facing the economy, rather than taking a telescopic view from far away.

In his tweets, Dr Atif Mian had rightly pointed out the problems but without sharing any practical solutions. For e.g. on the energy sector, Dr Mian had rightly pointed out energy dependence on imports as a major policy challenge. But his solution for ‘pulling the best renewable energy scientists into the country and giving them discretion and resources’ fails to comprehend the immediate problems facing the energy sector – namely the circular debt as a result of excess capacity coming online and all driven by long-term binding contracts.

Under the PTI regime, he said the ambitious reforms were introduced to the energy sector with a focus on reducing our import dependency, transmission losses, encouraging competition and renegotiating long-term contracts with IPPs to reduce the burden on consumers. The MoUs with 53 IPPs have been signed and will save Rs836 billion in costs to consumers.

The landmark WACOG bill and the Competitive Trading Bilateral Contracts Market (CTBCM) have been approved and will lead to more competition in the energy sector. Five hydel dams under construction, first time since the 1970s will reduce dependence on imports and reduce cost of energy for consumers. Eight hundred seventy eight kilometers of new transmission lines have been laid under the CPEC Lahore-Matiari project, the first time a comprehensive upgrade of our transmission infrastructure has been undertaken in over four decades and will lead to substantial decrease in transmission losses.

Despite these landmark reforms, he said, the challenges facing the energy sector are enormous. The estimated capacity payments as a result of all new projects undertaken over the last decade – none of which were signed off by the PTI government, will skyrocket from Rs468 billion in 2018 to Rs1,455 billion by 2023. Hence, the circular debt challenge continues to grow. All these projects are dependent on imported LNG, coal or oil. Any increase in international prices has an exponential impact on the domestic pricing of energy and the import bill. This is exactly what has happened in the current year with international commodity prices at the highest levels since 2011, he maintained.

Unlike previous regimes, the PTI government had attempted to break away from the elite-favoring rentier economy. The PTI government had targeted incentives for labour intensive sectors, including construction, agriculture, export industry, SMEs, manufacturing, tourism and Information Technology, to provide significant boost to job creation for the youth. As a result, we see that not only has Pakistan’s economy outperformed regional and global peers in terms of recovery from the COVID crisis but the quality of growth has also improved significantly – as reflected in the record increase in new job creation.

The PTI government had created 5.5 million jobs in the first three years, the highest by any government on record. Average of 1.84 million jobs per year is higher than the PPP (1.4 million) and PMLN (1.1million). Current trajectory suggests that we are on target to achieve 10 million jobs promised by Imran Khan in 2018 manifesto.

According to the WB, Pakistan had outperformed all regional economies during the 2020-2022 COVID period, with the lowest unemployment rate in South Asia at 4.3% compared to India 8%, Bangladesh 5.4% and Sri Lanka 5.9%. The economy is on a sustainable growth path. GDP growth had accelerated to 5.6% in FY2021. In comparison, US economy contracted -4%, EU -8%, India -7.3% and the Gulf states by -5%. No other government had achieved 5.6% growth in first three years. Economy was on target to achieve GDP growth above 5% in FY2022. LSM was growing by 7.6% during first seven months of FY2022.

Private credit offtake was 1.4 trillion, the highest ever in record. Exports were $23.3 billion in first nine months of FY2022 – on current path will cross $30 billion for the first time in history.

Remittances were at record level of $29 billion in FY2021 to grow to $ 34bn in FY2022. A total of $4 billion investment came from overseas Pakistanis in RDA. Profitability of the top 100 companies listed on PSX had posted the growth of 62% in 2021, the highest growth in the last 10 years. The IT package — over $350 million investment in Pakistani startups in 2021 – was higher than all previous years combined.

The progress made under the PTI government has been acknowledged by development partners. World Bank Doing Business Report 2020 had highlighted that Pakistan was one of the top 10 reformers in the world in terms of ease-of-doing business. Moody’s rating agency had upgraded outlook to ‘Stable’ from ‘under review for downgrade’ in 2020. The WHO had hailed Pakistan COVID response as one of the best in the world. The Economist magazine ‘Normalcy Index’ had rated Pakistan as the top country in the world in November 2021. Lawrence Summers, WB Chief Economist, had stated ‘the US should have emulated Pakistan in handling coronavirus.’ Bill Gates had hailed remarkable progress by Pakistan on COVID and polio eradication, Shaukat Tarin concluded.