Accord signed with China for industrial cooperation

Home Accord signed with China for industrial cooperation 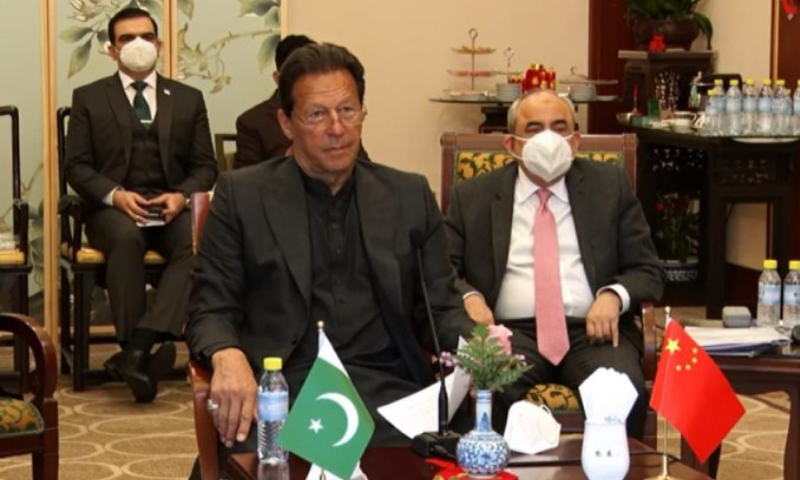 Accord signed with China for industrial cooperation

ISLAMABAD / BEIJING: Pakistan’s Board of Investment (BoI) and China’s National Development and Reform Commission (NDRC) on Friday signed the much-needed ‘Framework Agreement on Industrial Cooperation’ that will inter alia facilitate relocation of industries as well as investment from China and other parts of the world to Special Economic Zones (SEZs) in Pakistan.

The milestone was achieved a day after the arrival of Prime Minister Imran Khan in Beijing on a four-day tour. He held a series of meetings on Friday with executives of China’s leading state-owned and private companies, interacted with NDRC chairman He Lifeng to deliberate on China-Pakistan Economic Corridor (CPEC) projects, and also joined world leaders at the National Stadium as the spectacular Beijing Winter Olympics 2022 kicked off.

Reaffirming the commitment of two sides to timely completion of CPEC and its high-quality development, the premier said both sides would continue to expedite efforts to achieve Gwadar’s potential as a ‘hub of regional commerce and industry’ while also prioritising preparatory work on the railway’s Main Line-1 (ML-1) and key energy projects.

The NDRC chairman said China attached immense significance to CPEC and was firmly committed to its steady progress and development. He noted that China had become Pakistan’s largest investment and trade partner in last seven years and both sides were keen to maintain the momentum of overall economic and trade ties in future as well.

The chairman added that NDRC and all relevant Chinese institutions would continue their efforts to encourage Chinese state-owned and private enterprises for investment in CPEC projects.

In this regard, both sides also decided to establish new green, digital, health, trade and industry corridors to enhance sector-wise cooperation.

Thanking the prime minister for his firm support, the NDRC expressed China’s readiness to assist Pakistan in the areas of industrialization, agricultural modernization, science and technology and socioeconomic development.

On the occasion, federal Minister for Planning and Development Asad Umar and NRDC vice chairman Ning Jizhe also signed the minutes of the Sixth JWG meeting on Gwadar held on December 30, 2021.

During the meeting, both sides welcomed the signing of the Framework Agreement on Industrial Cooperation which was signed by Minister of State and Board of Investment of Pakistan (BoI) Chairman Mohammad Azfar Ahsan and China’s National Development and Reform Commission (NDRC) Chairman He Lifeng on behalf of their respective governments.

The agreement holds a paramount significance for the second phase of CPEC and its future course of action. Industrial cooperation is one of the 10 joint working groups established under CPEC in 2016 for which both BOI and NDRC were assigned as the lead agencies by their respective governments. A memorandum of understanding was signed between the two organisations in 2018. As CPEC entered its second phase, the need for a comprehensive framework agreement became imperative and both countries reached the consensus on MoU’s elevation into a Framework Agreement in 2020, whereby BOI took the lead by sharing the draft agreement with its Chinese counterpart to kick-start the negotiations.

The joint working group on industrial cooperation is also spearheading the development of SEZs, relocation of Chinese industries and B2B joint ventures of Pakistani and Chinese companies.

Mr Ahsan said the signing of the framework agreement marked the beginning of enhanced Pak-China industrial cooperation and this would be a quantum leap for CPEC. Concrete commitments have been formalised through the agreement whereby the Pakistan government will ensure concerted efforts for a conducive business environment and timely development of the SEZs.

The agreement reaffirms prioritized development and operations of the nine special economic zones, with primary focus on the early completion of Rashakai SEZ in Khyber-Pakhtunkhwa, Allama Iqbal Industrial City in Punjab, Dhabeji SEZ in Sindh and Bostan SEZ in Balochistan. For colonization of these SEZs, emphasis was laid on business-to-business matchmaking mechanism of Pakistani and Chinese enterprises.

BOI Chairman Azfar Ahsan and Secretary Fareena Mazhar strongly believed tangible outcomes would be achieved under the ambit of CPEC Industrial Cooperation. Mr Ahsan said the Chinese government showed keen interest in signing the document during the prime minister’s visit that was testimony to the diligent efforts of both countries to foster industrial cooperation.

In a series of meetings with leaders of the Chinese companies which expressed the desire to establish a $3.5bn reprocessing park in Gwadar and a $350m textile cluster near Lahore, the prime minister appreciated their keen interest to invest in Pakistan and encouraged them to benefit from business-friendly policies for investment in CPEC’s SEZs, adds APP.

The prime minister was accompanied in the meetings by federal ministers, advisers and senior officials.

PM’s aide on CPEC Khalid Mansoor, who is accompanying the prime minister during his four-day China visit, told the media that a consortium of three Chinese companies expressed willingness to build a metal and paper re-processing park in Gwadar within two to three years.

To improve yield and seed quality in Pakistan, he said, three major agricultural firms expressed the desire to establish a modernization research lab and a demonstration plot on the Chinese pattern. Also, Chinese fertilizer companies wanted to invest in the export-oriented growth of corn and soybeans, while another company expressed its interest in the dairy sector to enhance the export of milk and other dairy products, he added.

A Chinese textile firm, reputed for high export-quality apparel, also planned to build a textile cluster over 100 acres of land on Lahore-Kasur Road by investing $350 million, which would also create around 20,000 jobs, he said, while expressing the hope that Pakistan would be able to get commitment from a variety of sectors and major companies of Fortune 500.

In an exclusive session with the representatives of leading Chinese think tanks, varsities and Pakistan Study Centres, PM Khan said the world did not need another Cold War and Pakistan believe the key driver in international politics should be cooperation, rather than confrontation.

Pakistan in the past had played a role in building bridges and remained ready to do so again, he remarked.

Referring to Pakistan’s National Security Policy, Mr Khan said the vision to put economic security at its core was built upon connectivity and development partnership for which China remained an indispensable partner for Pakistan.

The prime minister also thanked China for its unwavering support on the Jammu and Kashmir dispute and spoke about importance of Pakistan-China ties in ensuring regional stability and prosperity.

Referring to India’s aggressive behaviour and the prevailing Hindutva ideology as a threat to regional peace and a cause of lingering instability of region, the PM said the world must pay attention to India’s continued atrocities and oppression against the people in the India-held Kashmir.

He underlined the importance of Pakistan and China working with Afghanistan to advance shared objectives of peace, development and connectivity and called on the international community that Afghans should not be left alone in the time of need.

He also emphasized on the need for greater efforts for joint research and intellectual dialogue to better appreciate the common threats and opportunities facing the two countries.

Chinese President Xi Jinping inaugurated the sports event that brought together around 3,000 athletes from 91 nations to compete across 109 medal games.

As the athletes including Mohammad Karim, who would represent Pakistan in Alpine Skiing, paraded at the opening ceremony, the prime minister and his delegation arose from their seats to welcome Pakistan’s squad passing through the venue waving the national flag.

Starting from February 4, the games will continue till February 20.