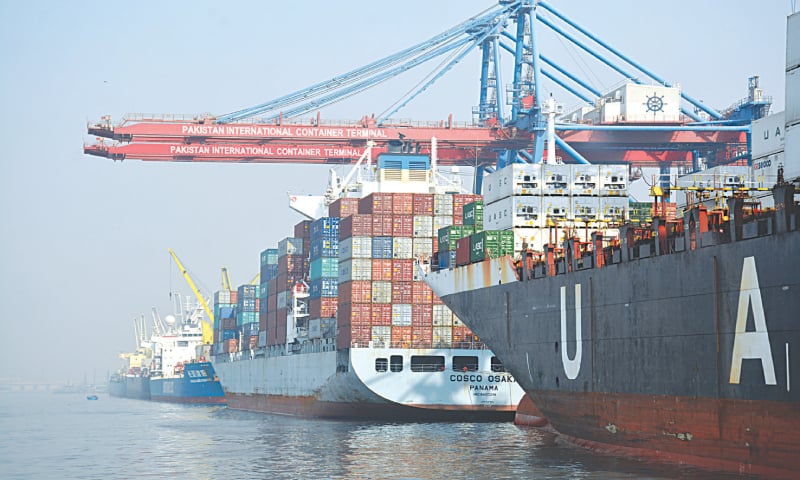 ISLAMABAD: Pakistan’s merchandise trade deficit widened by an alarming 57.85 per cent year-on-year to an all-time high at $43.33 billion during the first 11 months of 2021-22 through May on the back of higher-than-expected imports, Pakistan Bureau of Statistics data showed on Thursday.

The 11-month deficit has already crossed the full year’s highest trade deficit of $37bn in 2018 when the PML-N government came to an end, mostly led by the China-Pakistan Economic Corridor-related imports. This year’s trade deficit is propelled by the highest ever increase in oil prices in the international market.

The trade deficit has been on the rise owing to an unprecedented increase in imports due to a rise in global commodity prices, while exports stagnated at around $2.5bn to $2.8bn a month, mostly those of semi-finished products and raw materials.

However, the trend then reversed and the trade gap jumped to $30.8bn in the 2020-21 fiscal year and is expected to reach an all-time high during the ongoing fiscal year.

The government imposed a ban on the import of nearly 800 luxury and non-essential goods on May 19. The real impact of this decision will be visible in the ongoing month.

A major initiative of the government to encourage raw material imports and rising global oil prices and high demand at home pushed up the import bill.

A surge was also noted in the import of vehicles, machinery, and vaccines. The government is also importing wheat, sugar and costly palm oil. The import bill increased by 26pc to $56 billion in the 2020–21 fiscal year, up from $44.6 billion the previous year.

Exports decreased by 10.22pc MoM in May. The government has projected the annual export target for commodities at $31.2bn and services at $7.5bn.

The export proceeds in June are expected to be in the range of more than $2.6bn which will help the government to achieve its target.

According to the finance ministry’s monthly economic update and outlook for May, exports of goods and services remained strong in April 2022 and it is expected that this positive trend will continue in May 2022 on the back of export-oriented policies and growth recovery in Pakistan’s main export partners.

On an MoM basis, the growth in imports of goods is expected to be negative due to the ban on non-essential and luxury items.

Since mid-2021, the share of imports of goods and services in total domestic activity has stabilised at historically high levels. The upward shift in international commodity prices and international inflation, in general, played a major role in this development.

Moreover, remittances are expected to be around $2.5bn. Taking these factors into account, the current account will stay well below $1bn in the coming months.